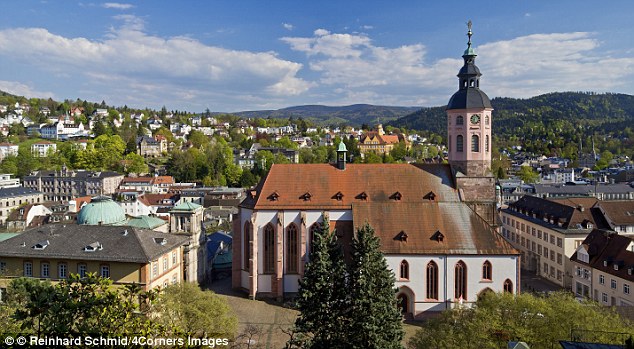 Germany is a country of great beauty and culture, and we Brits don’t explore it enough.

So I went with my husband Hugh to Baden Baden, via Epernay in the north of France (he will go everywhere for a glass of champagne).

We loaded the car with walking gear, golf gear, bathroom gear, opera gear – stuff for all seasons – and off we went.

A beautiful place: Baden Baden – with the 13th century Stiftskirche at its center – is extremely picturesque

Epernay has to be the only place in the world where you can drink champagne anywhere at any time of the day or night.

We walked the 18km of tunnels that Eugene Mercier, the man who put champagne on the map, opened in 1885. We walked along the Avenue de Champagne, home to names synonymous with luxury – Pol Roger, Moet et Chandon and Perrier-Jouet – marvel at what crafty marketing work old Eugene had done.

Then it was time to leave, the car now even fuller, thanks to the boxes of bubbles.

An easy 3.5 hour drive through the rolling countryside of eastern France took us to the Rhine. Smoothly crossing Germany, we reached Baden Baden in time for tea.

In the 19th century, Baden Baden – so beautiful that they called it twice – was the summer capital of Europe.

The visitor list reads like a Who’s Who of European history, from royalty (Queen Victoria, Kaiser Wilhelm) to writers (Dostoevsky, Turgenev, Mark Twain) to composers (Berlioz, Brahms and Mendelssohn).

They paraded through the Pump Rooms, visited the theater, and took to the water. Twain later stated that he had left his rheumatism in Baden Baden – “and Baden Baden was welcome”.

Wars and changing habits have deprived the city of its charm, but those who knew it still came to find peace and enjoy its dense and verdant environment on the edge of the Black Forest.

In the mid-1990s the city had the brilliant idea of ​​building a large concert hall, the Festspielhaus, to resurrect the cultural glories of the past. So now, once again, Baden Baden has it all.

Yet within minutes you can get lost in the countryside, trample forest trails, visit local vineyards or, in my case, play on Germany’s third oldest golf course, as beautiful as it is difficult. I swear there is a hole where you have to throw the ball down a hill, around the corner and through a cluster of trees – all in one fell swoop.

In the midst of these delights lies another landmark: the Brenners Park-Hotel & Spa. There are good hotels and there are great hotels. Brenners falls exactly into the latter category.

Owned by the same family for 40 years, it is a bastion of good taste. It has no-frills sophistication: a place where people come to feel comfortable and where the friendly, well-trained staff do their best to make sure you have everything you want.

Standing in the middle of the city, its terrace and gardens lead to the Lichtentaler Allee (which translates as Valley of Light) where the inhabitants of Baden Baden love to stroll in the sweet summer air through a park of auburn beech and oak trees.

In 1975 Frank Sinatra secretly wrote on the back of a painting in his room “Wherever you go, Brenners is the best”. It was found years later during a renovation.

The hotel offers it all: good food, an elegant spa and pool, and rooms furnished in a well-mannered style that makes you feel protected from the world. It is a difficult place to leave.

But let’s forget we did – to watch La Traviata, to hear Sir Andras Schiff play Bach and to scramble out of town to the beautiful old ruined castle with its magnificent views over the Rhine Valley.

And of course, we went to the casino, all gilded and Belle-Epoque candlestick.

I wagered on my favorite number, the red 14, and came out with more euros than I went in, as well as a nice buzz.

Dostoevsky (who wrote his novel Gambler in Baden Baden) didn’t have my luck and lost his shirt sometimes. If I had stayed in this lovely city much longer, I could have easily lost mine.

Baden Baden is not trendy: you would never call it “avant-garde”. But it looks reassuring. It gives you a sense of well-being.

As David Hockney, a regular visitor, observed: “I can get on my knees and walk away dancing.” “Would you come again?” I asked Hugh as we walked away. “Yes,” he said. “And the route via Epernay is definitely the quickest way to do it.”