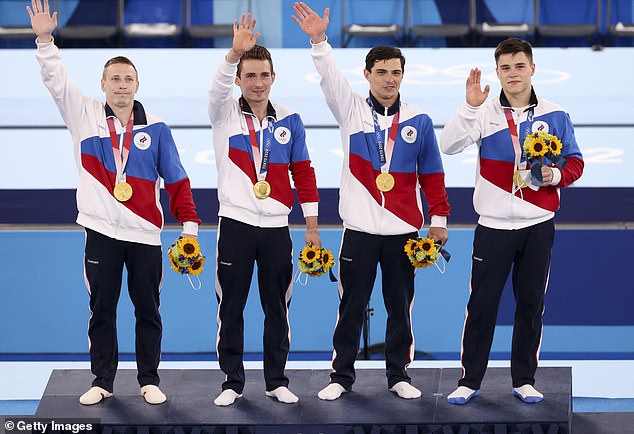 Viewers of the Tokyo Olympics could be forgiven for forgetting that Russia is officially banned from the competition as Russian athletes, kitted out in red, white and blue, continue to rack up medals.

Russia was banned from several major international sporting events over mass doping dating back to the 2014 Sochi Winter Games, but 335 athletes from the country who have proven they are untainted by the scandal have been allowed to participate in Tokyo under a neutral flag.

Known as the ROC – the Russian Olympic Committee – the team bears a strong resemblance to a regular Russian team and was placed fourth in the medal table, behind China, the United States – in joint first place with 21 medals – and Japan with 15, as of Tuesday morning.

Russia has a long history of Olympic success and athletes competing as the ROC have so far won 16 medals – five gold, seven silver and four bronze.

But at medal ceremonies, Tchaikovsky’s Piano Concerto No.1 is played instead of the national anthem and the Russian flag is nowhere to be seen, having been banned from any Olympic venue outside the Olympic Village.

However, the trikolor is clearly distinguishable on ROC athletes’ kit and the athletes themselves have little doubt as to which team they are competing for.

‘If the flag is not allowed, we ourselves will be the flag,’ Rugby captain Alena Tiron told the Russian state news agency RIA Novostu.

‘We know which country we stand for.’

Viewers of the Tokyo Olympics could be forgiven for forgetting that Russia is officially banned from the competition as Russian athletes  continue to rack up medals. Pictured: The ROC team win gold for artistic gymnastics 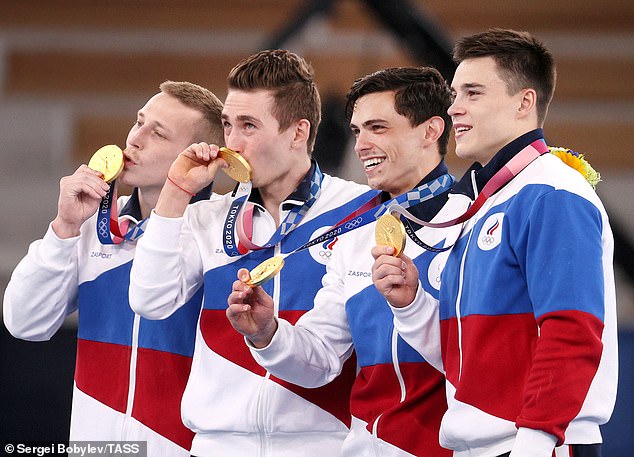 Russia was banned from several major international sporting events over mass doping dating back to the 2014 Sochi Winter Games, but some athletes are allowed to compete under a neutral flag. Pictured: The ROC team win gold for artistic gymnastics 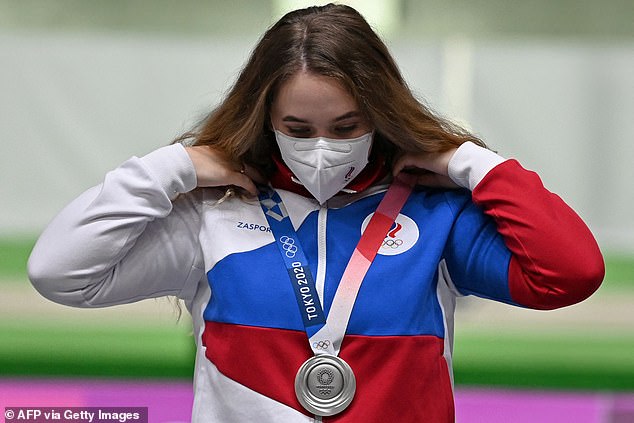 Known as the ROC – the Russian Olympic Committee – the team bears a strong resemblance to a regular Russian team and was placed fourth in the medal table, behind China, the United States – in joint first place with 21 medals – and Japan with 15, as of Tuesday morning. Pictured: Anastasiia Galashina wins silver in the women’s 10m air rifle

Even before the Games kicked off the ROC sparked anger by unveiling the kit in the Russian national colours.

The ZASPORT-designed kit, revealed in April, features polo shirts and jackets along with a white top, with large portions of blue and red emblazoned across the torso, and matching block-coloured bottoms.

ROC president Stanislav Pozdnyakov admitted at the time that the Russian flag was visible ‘really, really obviously’ in the design, saying: ‘You don’t really need to have a strong imagination.’

The kits were accused of making a mockery of the initial ban imposed by WADA – although CAS’ watering down has allowed for the colours of the country to be used.

The International Olympic Committee have emphasised that the designs ‘are in line with the established and published implementation guidelines.’ They explained that they were approved ‘on this basis’.

An initial punishment lasting for four years was imposed on Russia last year by the World Anti-Doping Agency (WADA), which saw them barred from events including the Tokyo Games and Paralympics as well as the 2022 World Cup in Qatar.

The ban was then reduced to two years by the Court of Arbitration for Sport (CAS), a move which was greeted with a fierce backlash.

It was unanimously found by CAS that Russia had not been in compliance with anti-doping rules and regulations.

The panel said it ‘considered matters of proportionality and, in particular, the need to effect cultural change and encourage the next generation of Russian athletes to participate in clean international sport.’

The ruling means that the phrase ‘neutral athlete’ must be displayed prominently on uniforms where the word ‘Russia’ also appears. The period of the ban will end in December 2022. 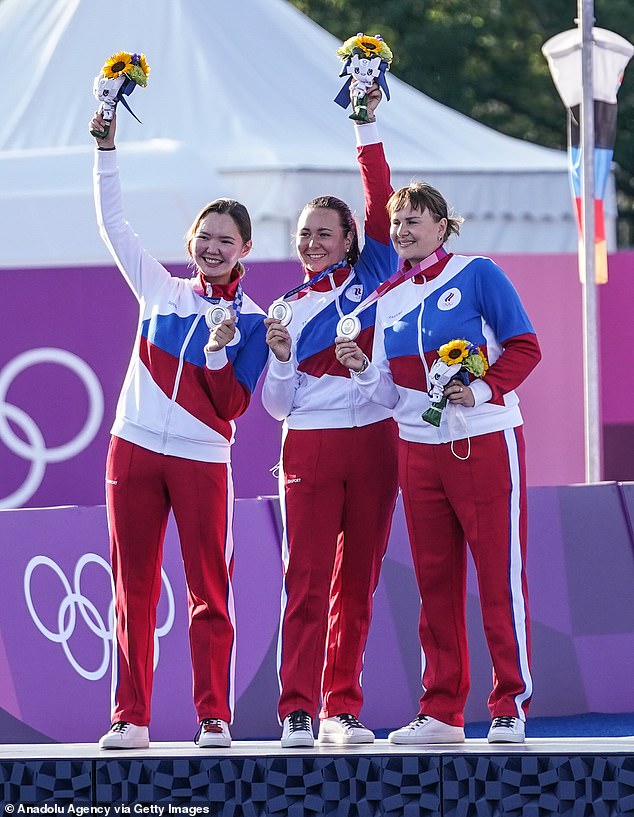 Even before the Games kicked off the ROC sparked anger by unveiling the kit in the Russian national colours. Pictured: The ROC win silver in the women’s team archery event 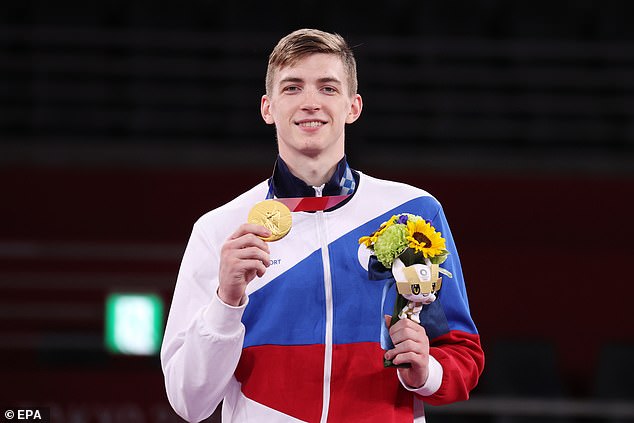 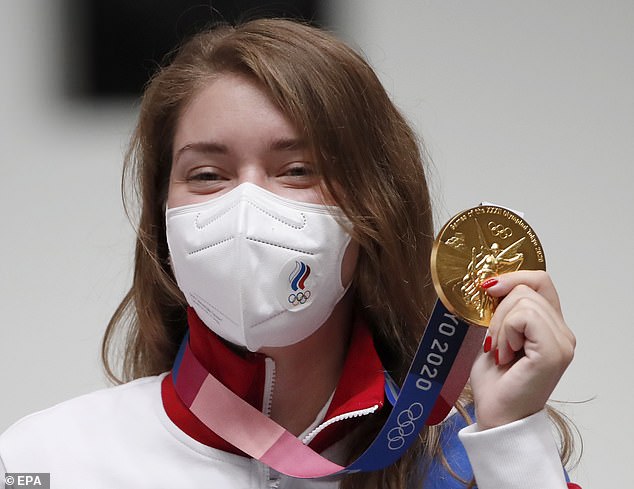 At medal ceremonies, Tchaikovsky’s Piano Concerto No.1 is played instead of the national anthem. Pictured: Vitalina Batsarashkina poses after winning gold in the women’s 10m air pistol 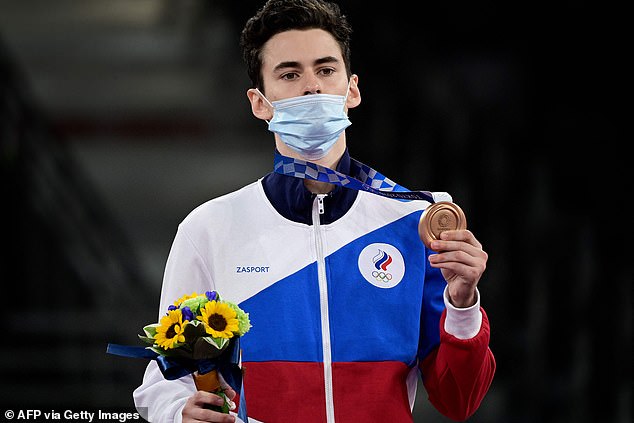 The Russian flag is nowhere to be seen, having been banned from any Olympic venue outside the Olympic Village, but its colours feature on the team’s kit. Pictured: Mikhail Artamonov wins bronze in the men’s 58kg Taekwondo

Dmitry Medvedev, a former Russian prime minister, had insisted that the suspension came about as part of ‘chronic anti-Russian hysteria’.

‘It is obvious that significant doping problems still exist in Russia, I mean our sporting community,’ Medvedev said. ‘This is impossible to deny.

Russian athletes are competing in the Games as the Russian Olympic Committee following a ban on the Russian national team.

The ROC was placed fourth in the medal table, behind China, the United States – in joint first place – and Japan, as of Tuesday morning.

Here are the medals so far won by the ROC:

‘But on the other hand, the fact that all these decisions are repeated, often affecting athletes who have already been punished in one way or another… of course this makes one think that this is part of anti-Russian hysteria which has become chronic.’

Russia has been banned from competing as a country in athletics since 2015. They were initially declared non-compliant in November of that year after widespread corruption was alleged.

A report, which was commissioned by WADA and carried out by lawyer Professor Richard McLaren, pointed towards state-sponsored doping in track and field athletics.

Further findings from another report in 2016 stated that the doping programme was operated across a four-year period, stretching across the ‘vast majority’ of sports at the summer and winter Olympics.

But, in 2018, the Russian Anti-Doping Agency (RUSADA) was reinstated as being compliant after the agency said they would release information from a Moscow-based laboratory taken from between January 2012 and August 2015.

It was discovered, however, that positive findings featuring in a version of the data previously provided by a whistleblower in 2017 were missing from the 2019 version of the files. Unsurprisingly, this triggered the beginning of a fresh inquiry.

An in-depth review was then carried out into the glaring inconsistencies and WADA’s executive committee unanimously decided to hit Russia with the ban.

After the decision was made, former WADA president Sir Craig Reedie highlighted the ‘determination to act resolutely’.

‘For too long, Russian doping has detracted from clean sport,’ Reedie said. ‘The blatant breach by the Russian authorities of RUSADA’s reinstatement conditions demanded a robust response. This is exactly what has been delivered.

‘Russia was afforded every opportunity to get its house in order and re-join the global anti-doping community for the good of its athletes and of the integrity of sport, but it chose instead to continue in its stance of deception and denial.’

Despite this, the suspension was deemed ‘not enough’ in some quarters.

‘I wanted sanctions that cannot be watered down,’ former WADA vice-president Linda Helleland said. ‘We owe it to the clean athletes to implement the sanctions as strongly as possible.’

Russia’s ban was imposed following the 2014 Winter Olympics, which were held in Sochi. There, athletes from the host nation won 33 medals, including 13 golds.

There were hundreds of Russian athletes who also took part at the 2016 Games in Rio, where the country clinched 56 medals in total. 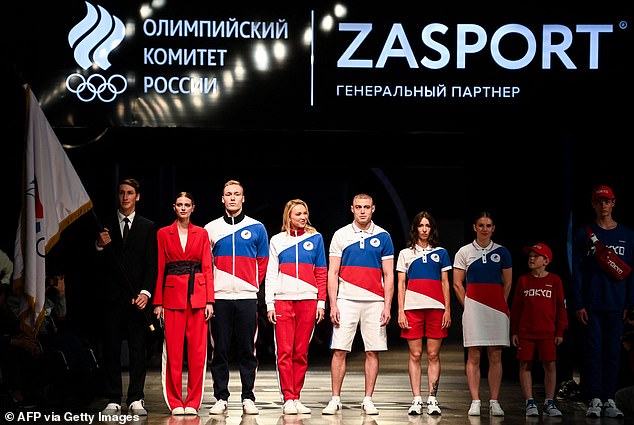 The ROC unveiled their kit for this summer’s Tokyo games. Many noted the apparent presence of the Russian trikolor 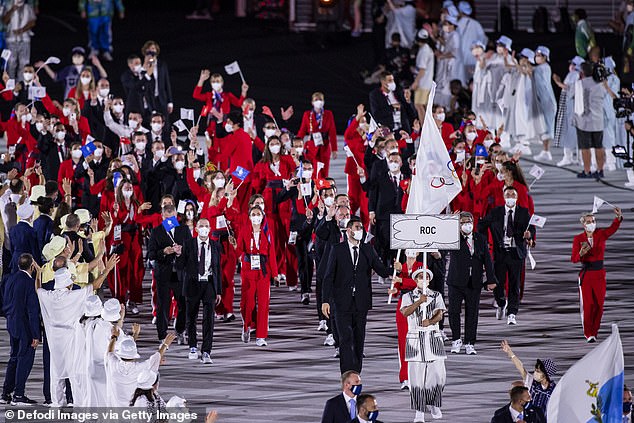 Russia has acknowledged issues in its implementation of anti-doping policies but denies running a state-sponsored doping programme. Pictured: The ROC walk behind a flag bearing the Olympic rings during the Tokyo opening ceremony

Following that, 168 athletes from Russia competed at the 2018 Winter Olympics in South Korea under a neutral flag.

The wide-ranging suspension imposed also means that Russia cannot host, or bid for, any major events for a period.

This would have included the 2032 Olympic and Paralympic Games, but the shortening of the ban renders Russia able to be granted the right to host provided their bid process begins from the start of 2023 or later.

Whistleblower Grigory Rodchenkov, a former anti-doping official in Russia who fled after his allegations about the state-sponsored doping programme, still believes that there is ‘more to do’ around the issue.

In a statement released following the ban, Rodchenkov said: ‘Finally, fraud, lies and falsifications of unspeakable proportions have been punished in full swing.

‘Those involved in the corruption of certain sports such as track and field, weightlifting, skiing, biathlon and bobsled should be punished retroactively.’

He went on to add: ‘There is a whole generation of clean athletes who have painfully abandoned their dreams and lost awards because of Russian cheaters. We need to take the strongest action to bring justice back to sport.’

Russia has acknowledged issues in its implementation of anti-doping policies but denies running a state-sponsored doping programme. 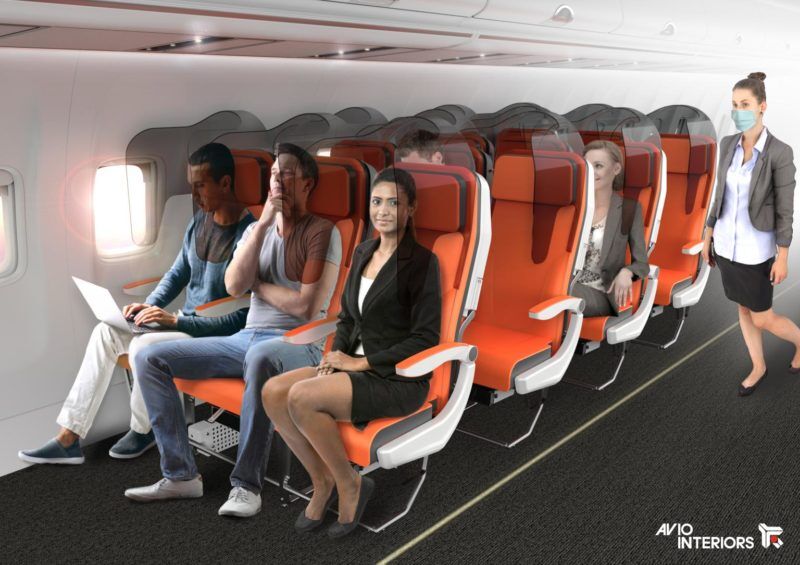 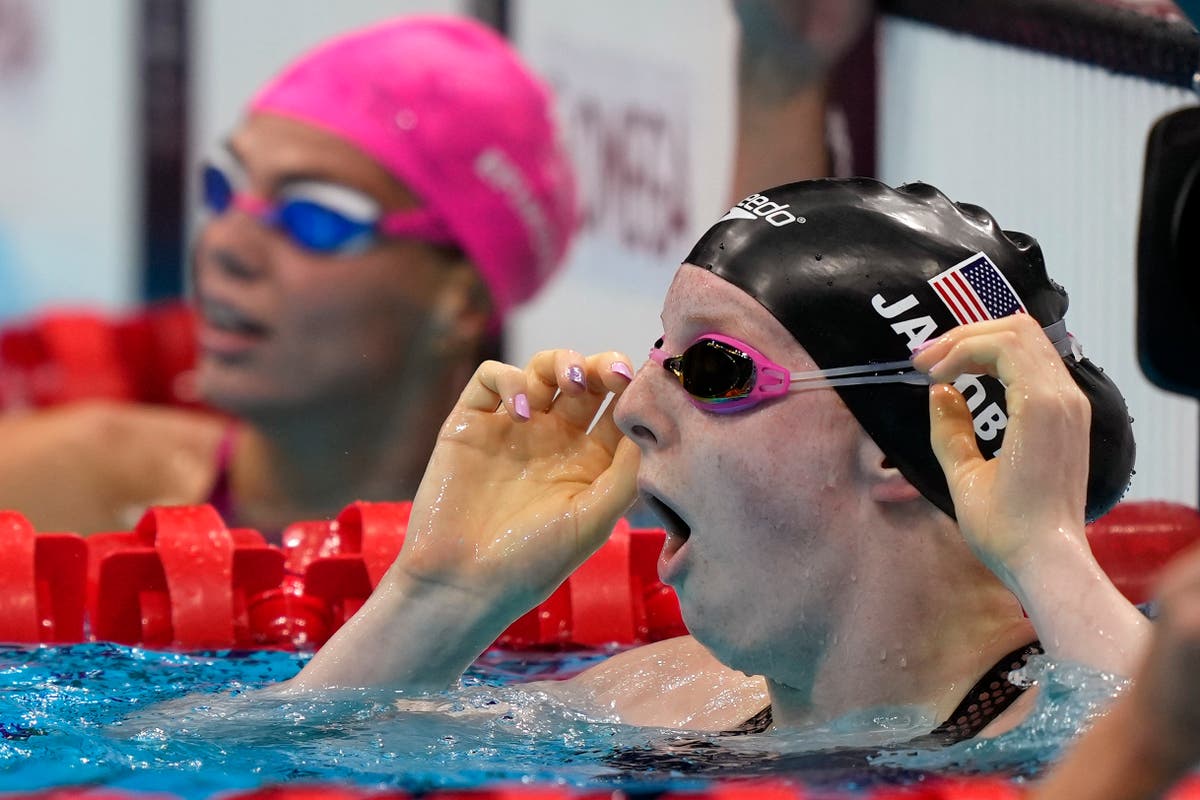