Her name, perfectly chosen by her loving parents, is an abbreviation of the Spanish word meaning miracle.

A little flair is already extraordinary.

For this blue-eyed child, happily cradled in her mother’s arms, it is an astonishing testament to the capabilities of modern medicine as one of a few dozen children who underwent groundbreaking spine surgery around the world – still in the womb.

The complex NHS operation, conducted by a team of 30 when Mila’s mother, Helena Purcell, was only 23 weeks pregnant, saved her from the paralysis and incontinence caused by the debilitating condition of spina bifida.

Today, the six-week-old is thriving, with little clues about the condition threatening to overshadow her future.

The complex operation by a team of 30 people from the NHS when Mila’s mother, Helena Purcell, saved her only 23 weeks from the paralysis and enuresis caused by the debilitating condition spina bifida.

Helena, 41, told The Mail on Sunday last night, “I feel very happy that Mila is finally here, and in good health after everything we’ve been through.”

The NHS Doctors are heroes in my eyes, and the surgery they performed has been amazing. If it wasn’t for them, it would have been a paralyzed mile. I am so grateful she had this opportunity.

Mila is most valuable to Helena and her husband, Ian, 46, because her battle to enter the world began long before the operation.

The couple, from Hornchurch, Essex, and already have a three-year-old son, Luca, have undergone seven rounds of IVF, at a cost of more than £ 30,000, to deliver their second child.

It was a long and emotionally difficult ordeal that made Helena, the language teacher, more determined that this pregnancy – with one of her remaining eggs – would be successful.

She diligently took her recommended daily dose of folic acid, which is a necessary supplement for normal growth and may protect against spina bifida.

But on November 22 last year, when Helena went to Queen’s Hospital in Rumford for a 20-week scan, which checks for abnormalities, the ultrasound specialist paused after reviewing the vital organs checklist. 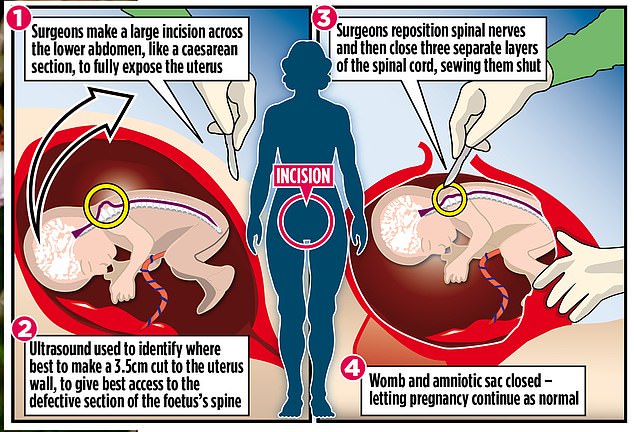 Helena recalls: “ I knew something was wrong. I asked if everything was fine and she said, ‘Just give me a moment – I need to check. “

Then came the news that every waiting parent dreaded. The ultrasound specialist gently told the couple that their baby had spina bifida.

The debilitating condition, which affects one in every 1,000 babies born in the UK each year, stems from a problem with the neural tube – the structure that eventually develops into the baby’s brain and spinal cord.

Part of the tube fails to close properly, resulting in nerve damage that can cause paralysis of the legs, incontinence, and, in some cases, brain damage.

What the ultrasound specialists told Helena and Ian, based on the examination, was devastating. “There was a big lesion in her spine – it was half open, and the nerves were pushing out,” Helena says. I couldn’t stop crying. I was in parts. We looked into it while pregnant with Lokka, and we knew it was going to have a huge impact on her life.

The impact has changed the lives of both children and their families, to the point that about 80 percent of mothers choose to have an abortion.

But for Helena, there was no doubt that she would keep her little daughter.

Couldn’t finish because of what I went through with IVF. She was indeed a child prodigy.

Doctors kindly explained their options. When spina bifida is detected, surgery may be performed soon after the baby is born to close the spine, but this is usually very late.

But Helena and Ian were given another choice: a new, groundbreaking operation on their young daughter while she was still in the womb.

It has been implemented since early 2020 on the NHS after being developed in the United States, and includes teams of highly skilled doctors who have been specially trained in the procedure.

This will include cutting Helena’s open uterus to allow doctors to reach a mila. The amniotic fluid surrounding the baby will be drained to allow for delicate surgery.

Professor Stephen Boyce, Medical Director of NHS England described the process as groundbreaking and “just one example of innovative treatments pioneering the NHS around the world”.

But surgery like this early in pregnancy – with an inclination measuring only 11 inches – is not without significant risks.

The couple were told the odds of losing Mila were 1 in 100, and that could cause Helena’s uterus to rupture. There was also a risk for Helena to think about it, which led to some difficult conversations with Ian.

“But I felt I had to do it for her – to give her the best chance at having a decent quality of life.”

Perhaps fortunately, there was little time to think about the possibilities. The couple were told that the procedure should be done within a four-week period while Helena was between 23 and 26 weeks pregnant. Too early and the child is still too young to have the operation; It is too late and the damage cannot be reversed.

But first, in order to be accepted for surgery, Helena had to undergo a series of tests and scans.

If Mila is unlucky enough to have a chromosomal condition as well as spina bifida – such as Down syndrome or Edward – then surgery will be refused. Helena knew that the chances at 41 were higher than those of younger women.

“It was a very long two weeks,” says Helena now. I was so nervous, just staring at walls, waiting for the phone to ring.

There was great relief when they were given the green light on December 3. The operation will take place five days later in the hospitals of the University of Leuven in Belgium, funded by the NHS and led by the world-renowned fetal surgeon Professor Jan DeBrist together with a team of NHS and Belgian doctors.

But even with this specialist care, Helena was only natural to worry. “I was terrified,” she admits. I’m not afraid to have the operation – but I’m afraid to lose it.

I know one percent is a very low chance, but the risk of spina bifida is 1 in 1,000, so in my opinion at the time this meant that I had a much greater chance of losing it in the process than something that actually happened. “

She and Ian Eurostar traveled to Belgium on Sunday, 6 December, and as the recent coronavirus crisis began to escalate in the UK, they first had to obtain papers proving they had an exceptional reason to travel.

Early in the morning of December 8, Helena entered the stage on wheels, tired and exhausted after an uncomfortable night. She was alone all night, because visiting restrictions meant Ian couldn’t be with her. When he left, he promised to call upon her exit from the stage.

Moments before the anesthesia affected, Dr. Emma Pridaki, the Helena NHS advisor, put her hand on her shoulder and told her, “You are getting the treatment of excellence.”

During the intense four-hour operation, Helena was unconscious while a team of 30 people got to work.

Besides the embryologists, the operation required a neurosurgeon and an anesthesiologist – one for Helena and the other for Mila – obstetricians, pediatric surgeons, radiologists and neonatologists, in case the baby needed to be born in an emergency.

It was 12:30 p.m. as Helena opened her eyes, sagging. While there was an apparent relief in her favor, her first desperate thoughts were for her baby.

“I just wanted to know that she was fine,” she says. When Jan told me it was, I was relieved to hear it. I felt as though an enormous weight had been lifted off me.

I stayed in the hospital for a little over a week while Mila’s condition was being monitored, and they came home on December 23.

She was reassured that the procedure worked as well as it could have been, but in the end its success would only be known after Mila was born. It will happen within 12 weeks, on March 19, the date doctors set for a cesarean delivery at 36 weeks and five days of Helena’s pregnancy.

Even this didn’t go smoothly. Right after Christmas, when Helena was 25 weeks pregnant – which is way too early for Mila – she started experiencing contractions. Fortunately, these were controlled with medication.

Helena recalls: “I was very scared – I sat in a chair day after day without moving.”

But in the end, Mela entered the world without any hindrance. She was born at 3:30 pm, weighed 6 pounds 4 ounces, and announced her arrival out loud.

“I felt so happy that she was finally here,” says Helena. To my surprise and happiness, they just treated her like a model child.

Doctors carefully examined Mila for those first few days but there were no signs of any paralysis. Now she can feel her toes, her movement is almost normal and her bladder and bowels are working normally. Although there is little fluid in her brain – one of the most secondary symptoms of spina bifida – doctors are not concerned.

“We have to live day in and day out, but at the moment everything looks fine,” Helena says.

As for Helena and Ian, their little family of four is now – finally – complete.

“You know, I never thought this would happen,” she admits. I thought I would only have to accept that I was blessed with one baby.

“But to enjoy another, after all that we have been through, it appears to you that miracles happen.” 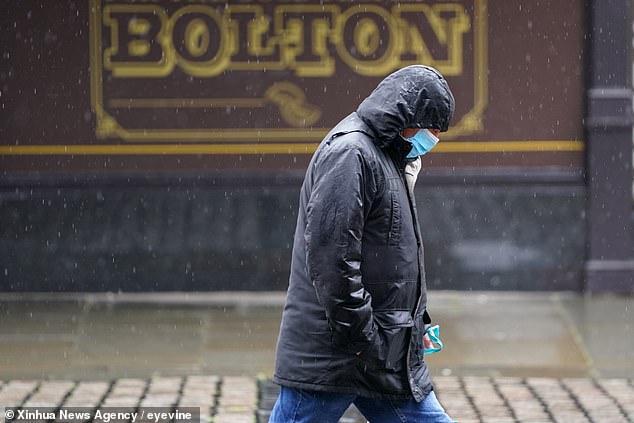