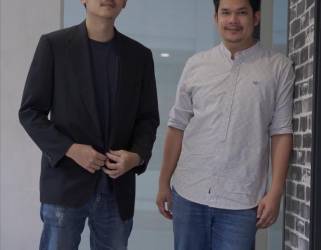 Eleven years ago, they decided to quit a steady job and invest their energy to make their childhood dream come true.

In 2010 they founded a production company, Feisk Sdn Bhd, and became professional directors.

Iskander had been in the banking industry for five years, while Feisal had been a sound engineer for less than a year.

“When we were growing up, we were fascinated by video cameras,” said Iskander, 36.

“Unfortunately, the gadget was a little too expensive for us.”

Creatively, the brothers cut out a camera image from a magazine and put it on a cardboard and pretended to shoot some kind of visual.

But years later, their parents managed to get them a real video camera and started shooting real moving images.

The career transition was not easy.

“The first three months we ate only bread and tuna,” Iskander said.

They started their career by shooting wedding videos.

After two years at this pace, they shot their first TV show, Kampungung mission, a reality show similar to Survivor, where contestants face grueling tasks in each episode and are eliminated in the process.

Subsequently, they switched to short films. In 2017 they shot their first feature film about a lost tribe, Temenggor.

Unfortunately, the film did not go through the Censorship Board and the film was not shown in local cinemas.

“I was totally devastated,” said 35-year-old Feisal, who had put his heart and soul into directing his first feature.

But the brothers did not allow that setback to break their spirit and continued to work hard to make their dream come true.

They had better luck with their second feature film Suraya, a horror thriller about a couple who encounter something supernatural while seeking refuge in a family during a thunderstorm. The film received rave reviews.

The two have just finished shooting their fifth feature film Ceroboh, which features a group of young people who are captured in a dystopian world where one of them is possessed. The film will hit theaters later this year.

Now they are about to start shooting their sixth feature film, entitled The land is mine.

“It’s going to be a creature movie,” Feisal said. The film is about a group of hikers on a jungle expedition who have the adventure of their life when they intrude into the creature’s lair.

So far, Iskander has played the role of producer in all of their films. This will soon change. Hopefully, Iskander will direct his feature film before the end of the year.

Djin she is dealing with a mother who loses her baby and, slowly, her depression leads her to the dark side, where she summons the devil.

The brothers admit that working together hasn’t always been an easy process.

“We are two different people and we have different opinions on how to manage things. It’s like a tug of war. But we have learned to compromise. We give time and space to listen to each other, ”Iskander said.

Feisal loves working with his brother as he admits he is a little too ambitious and has big projects beyond his own resources.

“Iskandar always brings me back down to earth,” said Feisal.

Their struggle as directors is far from over, but the brothers have no regrets for leaving their previous jobs.

“Being able to tell a good story on screen is something we enjoy,” said Feisal.